Just in time for NYC Marathon, the brand new GoRun3 has been released by Skechers Performance Division! With the exact same midsole/outsole as the GoRun2 but with an improved more breathable upper. Three colors has been release on Skechers.com: 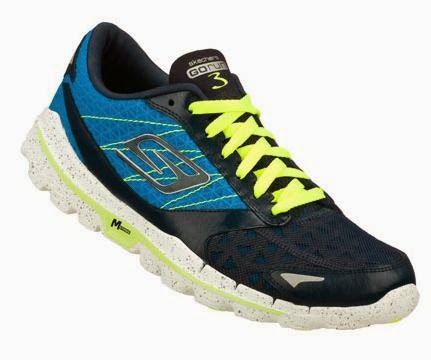 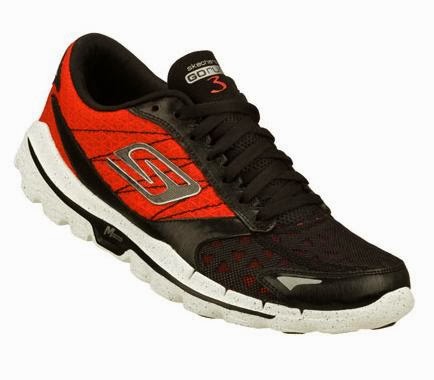 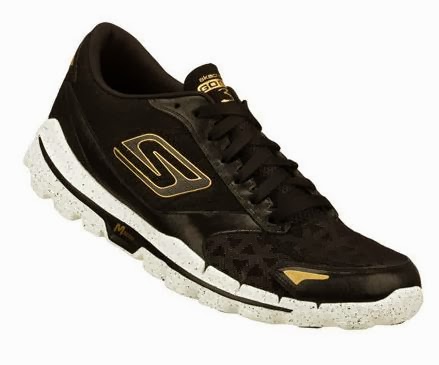 Review is coming soon! #Golikeneverbefore
Posted by therunningswede at 6:08 AM 3 comments: 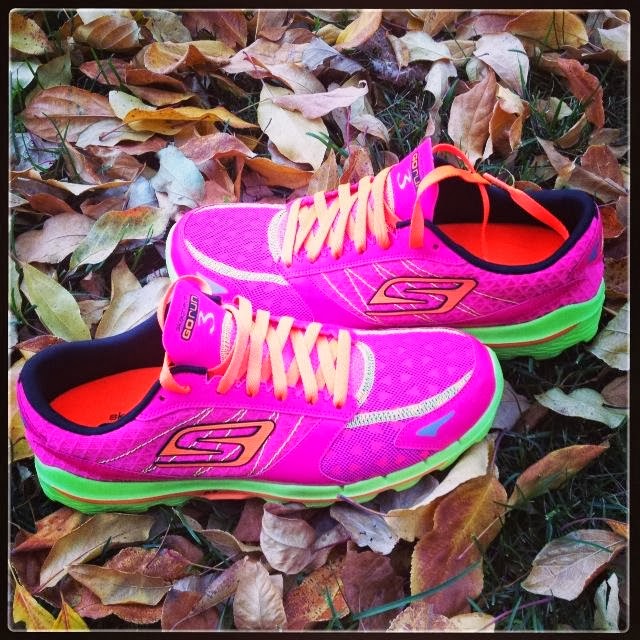 Posted by therunningswede at 6:11 AM No comments:

I always try to do F2F's races. Great organization and its for a great cause. So I had decided to just take it easy as I still recover from SteamTown Marathon. Well it did not happen, I'm to competitive. After the start legs felt good and I was on 5th place after the big grass field were the start took place.
When we were hitting the single trails I was behind two runners who did not keep up with the pace I had in mind, so when we hit one of the hills around mile 2 I passed them. One of them had more gas in the legs and started to chase me, I still had a few seconds. At this point my calves were trashed, pretty much the same feeling I had during the SteamTown. Runnable but very painful and thight. The rest of my body felt fine and I was really motivated. I gained some time on the guy behind on the hills but he was faster then me on the flat parts. By mile 5 we missed a turn, it was clearly not marked and the volunteers was not out in time. I knew that the last 3 miles were going to be very hilly and if I could just keep the pace, I would beat the runner behind me. I popped a gel at mile 5 as well. By mile 6 we hit some good hills and the guy behind me lost time again, at the same time I could feel some more energy coming. Probably some from the gel and the fact that I was stronger then the guy behind. I knew the rest of the course would be hilly and I was stronger then the guy behind. I know had a 10 second lead. I kept my pace strong and the last mile I pushed a bit extra. I finished strong and are happy with the race in general. New PB for the course.... 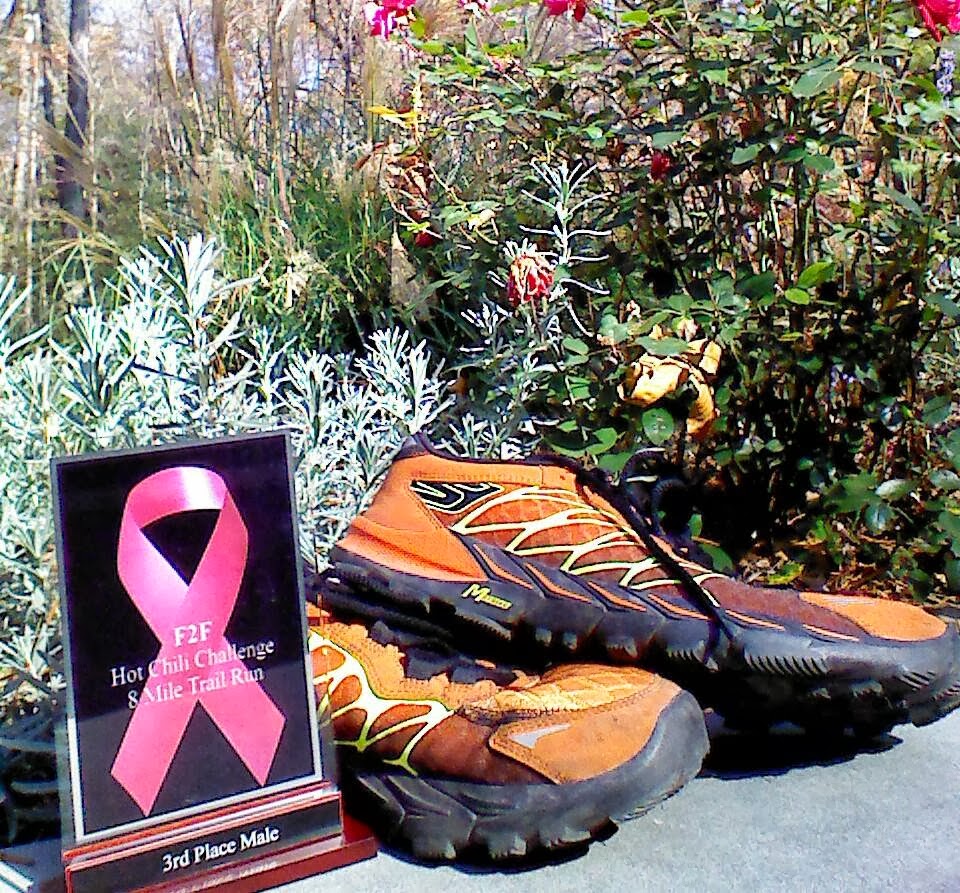 Again I used Skechers GoBionic Trail. The terrain was really hilly and very rocky. Pretty much all hills knife sharp rocks. The GoBionic trails kept me close to the ground and offered enough of protection against the rocks. The grip was outstanding, despite some rain during the week and all the leafs. I couldn't ask for more from a trail shoe. legs (not calves) anf feet were great after the race, not bruised. 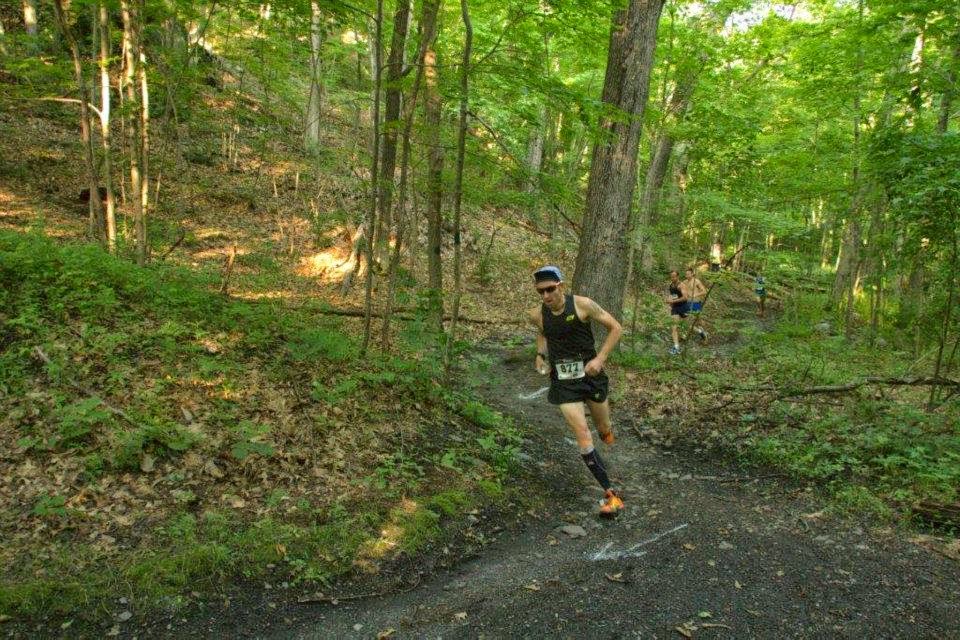 Really happy to finish third. Probably not a good idea to race this short after a marathon as my calves took a hit again. But again, it was for a great cause!

Distance came up short this year, last year it was to long. GPS does not work as good over hilly terrain I guess. All cred to F2F and the Scheid brothers who won the race, amazing, fast guys!
Posted by therunningswede at 7:48 AM 3 comments:

Fall is here with full force and also some SKECHERS Performance Division news:

Bryan Morseman blew away the competition this past weekend at the Mohawk Hudson River Marathon in Albany, NY. Morseman finished with a time of 2:24:24—the 5th fastest time in race history and 7 minutes faster than second place. Since joining our team in August, Bryan has won the Glen Iris 5k and would have won the Mill Race Marathon in Columbus, IN if the lead biker didn’t guide him off the course. Bryan has a marathon PR of 2:20 and hopes bring that down to the Olympic Trials qualifying standard of 2:18. Congrats Bryan! 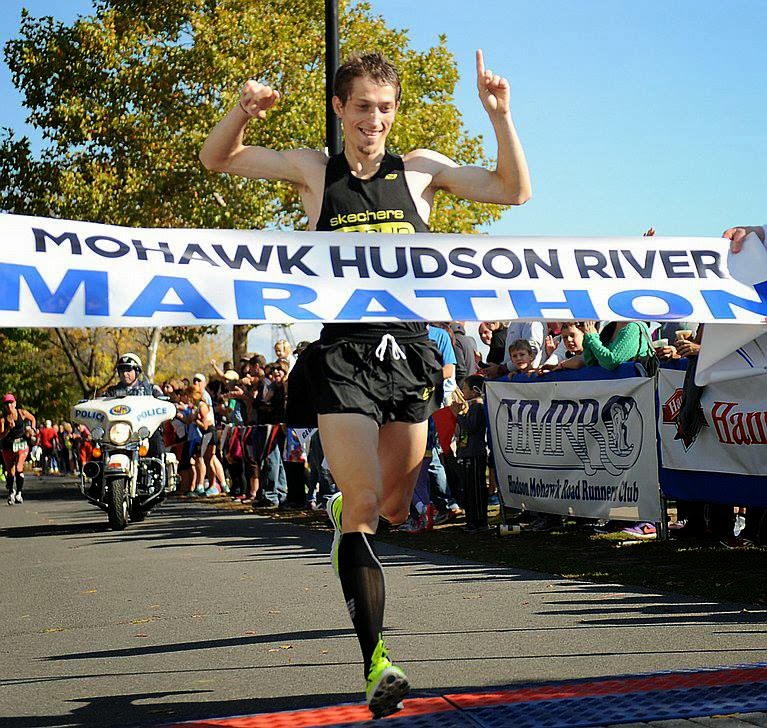 Are you planning to run Houston Marathon? Here is your opportunity to win a free entrance, air fair and 2 hotel nights with SKECHERS Performance! 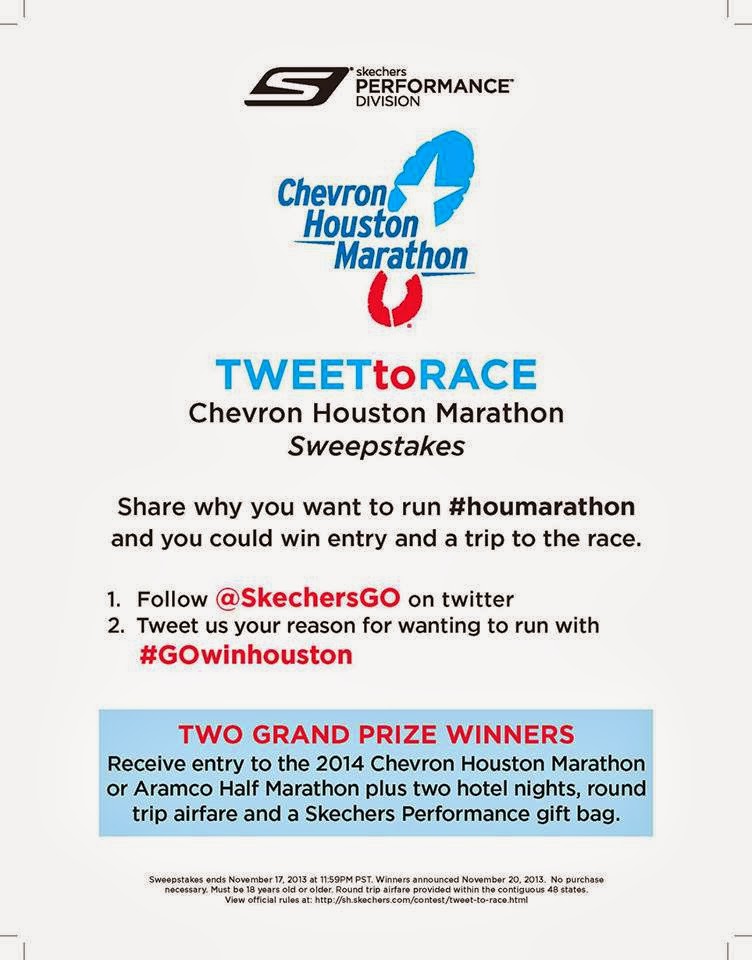 ALWAYS!
Run Safe/Run Smart…Check out the photoluminescent glow technology in our new Skechers #NiteOwl: http://bit.ly/19Sa19q
Posted by therunningswede at 6:46 AM 1 comment:

A couple of months ago my friend and musician Douglas (Nitzer Ebb, DJMREX) contacted me and asked about my opinion regarding zero drop shoes, Douglas had Merrel's in mind. I asked Douglas if he would like to try Skechers GoBionic's instead and my friends at Skechers Performance Division, fitted Douglas and his wife visual artist Hazel Hill McCarthy III   http://www.hazelhillmccarthyiii.com/ in some GoBionics. So far Douglas and Hazel really like the feel of the GoBionics and are now on their second pairs, also trying the Trail version.

Douglas and Hazel lives and works out of LA where they often run and hike the trails around the LA surroundings.

After the busy summer/fall touring, remixing Depeche Mode "Should Be Higher" and now in the studio with DJMRex.

Douglas has promised to post some more pictures and write his own GoBionic review!
To be Continued..... 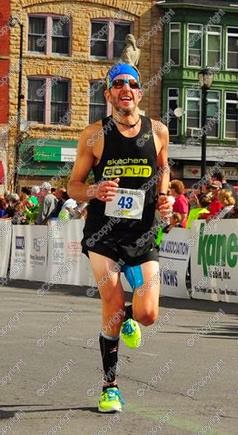 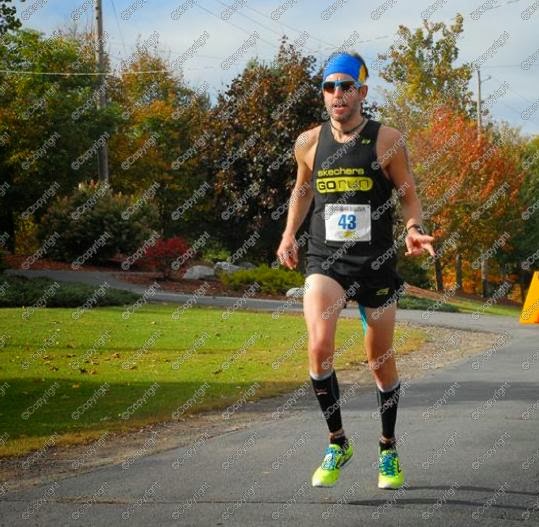 Posted by therunningswede at 6:58 AM No comments:

Steamtown Marathon......Up early in the AM to drive to the start. Scranton is about an hour away from my home. Really nice to be able stay at home and sleep in my own bed. On the way to the start I experienced some stomach issues, but Imodium took care of business:) I talked to Caleb a few days before the race and the strategy was clear, do not rush those hills. Try to vary the stride to be easy on my inner thigh that has been cranky. For the inner thigh I used KT tape and it kept it in place, with no worries. I was consider compression shorts but I chose not to in the end as I wanted more movement and it was going to be a hot ending, afraid of being to hot. As always for the marathon and my road races I used SKECHERS Performance Divisions GoRun Speed. The Speeds performed great as usual, giving me the protection I needed and the awesome fast responsive feeling. I always feel confident using the Speeds. 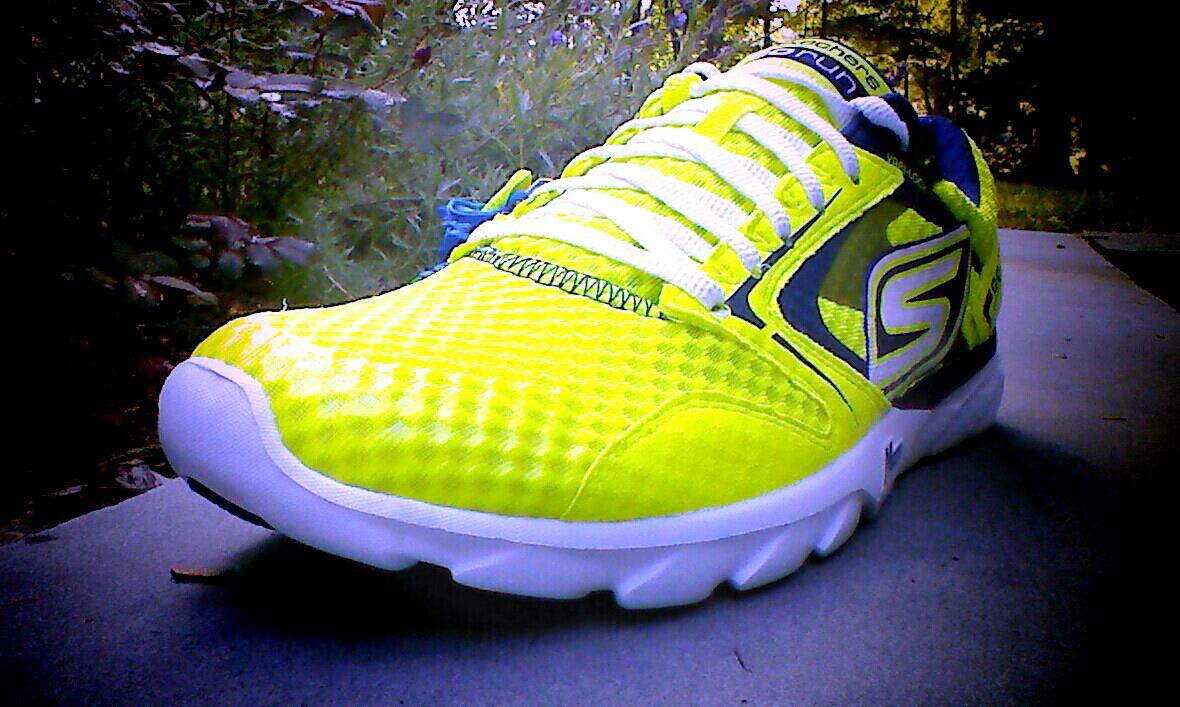 Pace went as planned, I controlled the pace on the down hills trying to save those legs. Some splits went maybe a little bit to fast but over all I was really happy how I performed. The big game changer was my fueling and my calves. Calves started to firm up right after I had passed the two long trail parts. I think in a combination with the down hills my calves was not happy to face the softer rail beds. Passed Erin and family around mile 17. Always a great motivational booster to see them support me! But the calves were still stiff as bricks. At mile 18 I stopped for 30 sec to stretch them out, after a few minutes of running it came back again. I didn't really slowed me down but the fear of cramping both calves was hanging over my head. looking at my splits after, I was now doing low 7s so maybe I got a bit fatigue at this point. Totally normal to have ups and down...I continued to run strong. Mindset was great and I was confident to break a new PB. Then BOOM! Right before the last 2 big hills, from no where, cramp left hamstring. I had to lay down down and ask for help, after 4 tries to stand up, I was ready to go again. Got some bananas from the awesome crowed and Gatorade. I felt strong again and started to pass runners. At mile 26 I was down doing sub 7 miles, this on a uphill mile (heartbreak hill ish). I had gas left and I finished strong, showing the Scranton crowed how you finish GoRun Strong!

Over all really happy with race, lessons learned need more fluids was really dehydrated after. I need to focus on the fluids when the stops are every other mile. Now its time to focus on some good recovery and to hit Boston stronger then ever, representing Skechers Performnce Division! #Golikeneverbefore!

Skechers Performance Division has been recognized in Runners magazines lately. Posted by therunningswede at 7:23 AM No comments:

One week to go....Saturday I had a small setback, inner thigh cramped up again. Not sure why this is coming back.It might have to do with my hydration as it has been really humid lately. I have to be more careful with my warm up and cool downs also add more time with ice. Sunday it was back to normal, a bit firm and stiff but I could run without any pain. The humidity killed me although and I was really tired in the end. Now the last week I'll be focusing on easy shake out runs, some speed involved for turn over. As usual lot of help from Caleb, #teamwickedbonkproof and Skechers Performance Division 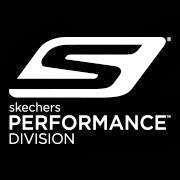 Nothing beats the colors of the fall here in NJ. Really hard to beat a run when the colors are on fire! 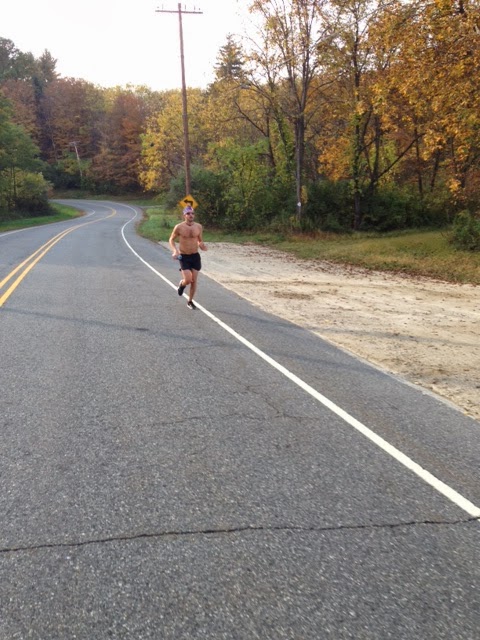 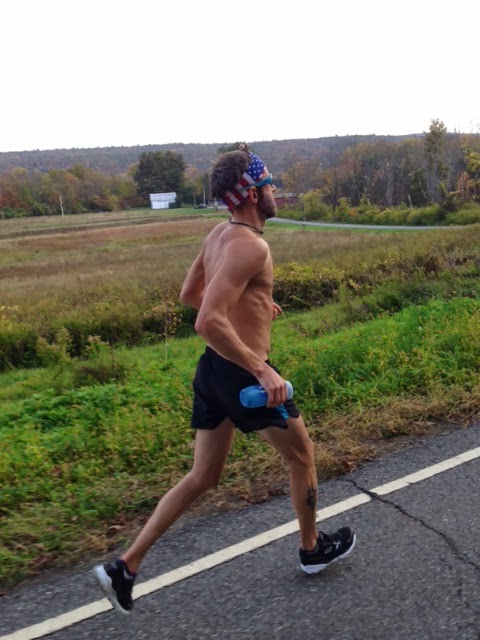 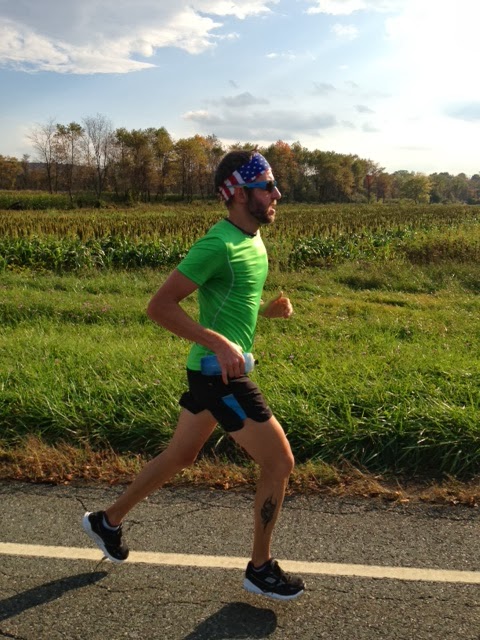 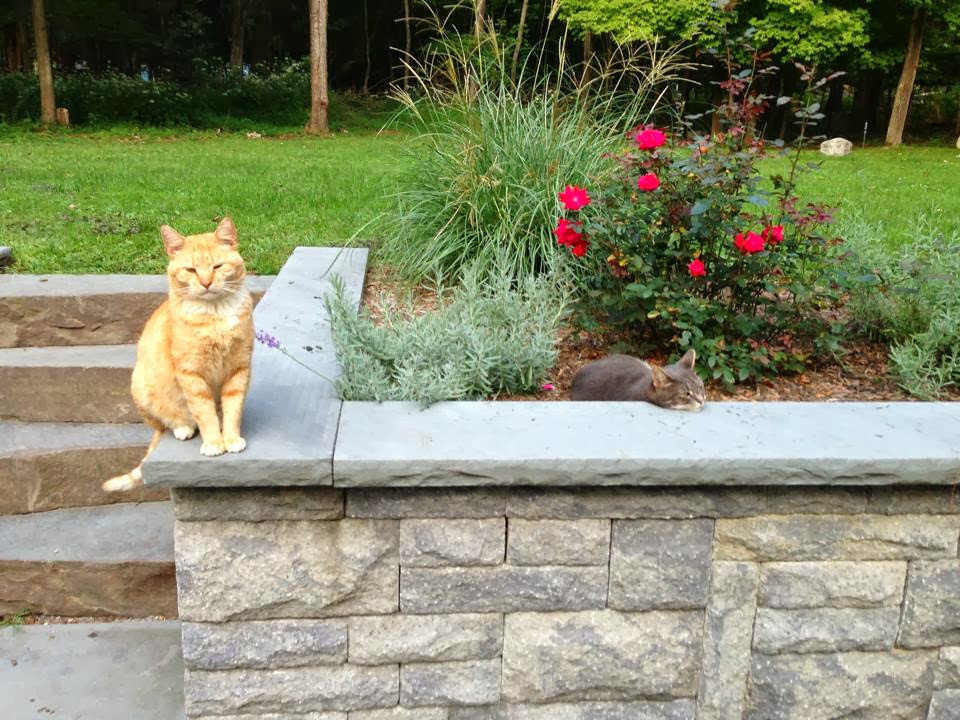 Our beloved Cat Apelsin is missing. During my runs over the I have been running all our back roads several time in hope to find him. Unfortunately not luck yet...


Posted by therunningswede at 7:04 AM No comments:

Fall is here full force and soon the winter. For me that means cold feet and long runs at night. SKECHERS Performance Division has released two interesting updates on their GoRun series: Nite Owl and All Weather running shoes! 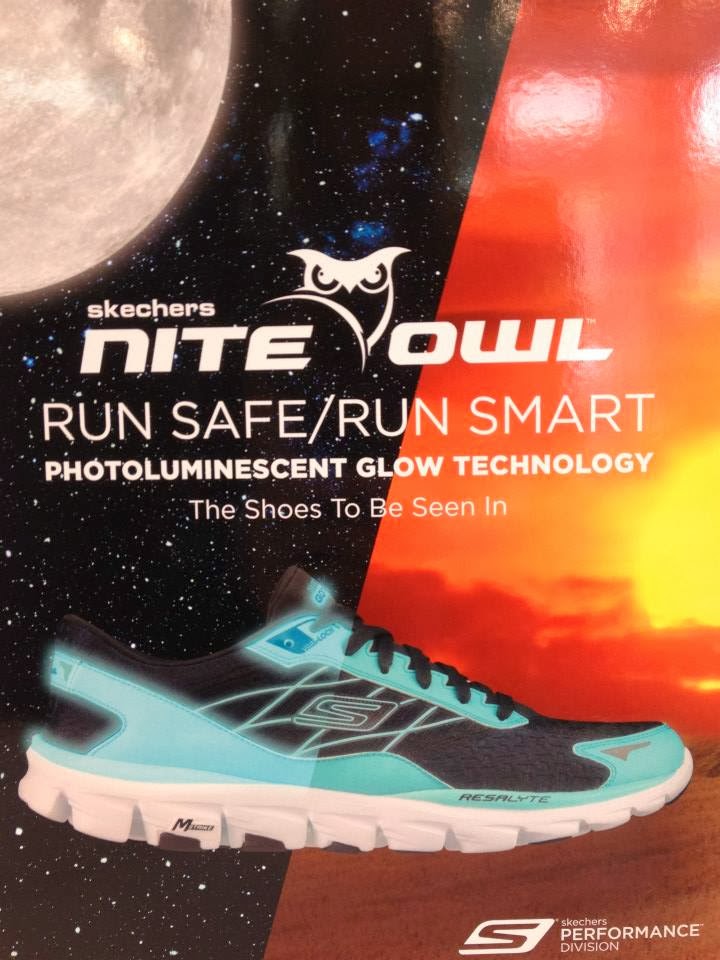 SKECHERS All Weather. In order to keep your feet dry during rainy days and winter SKECHERS has equipped their GoRun shoes with GoDri. GoDri is three layers: 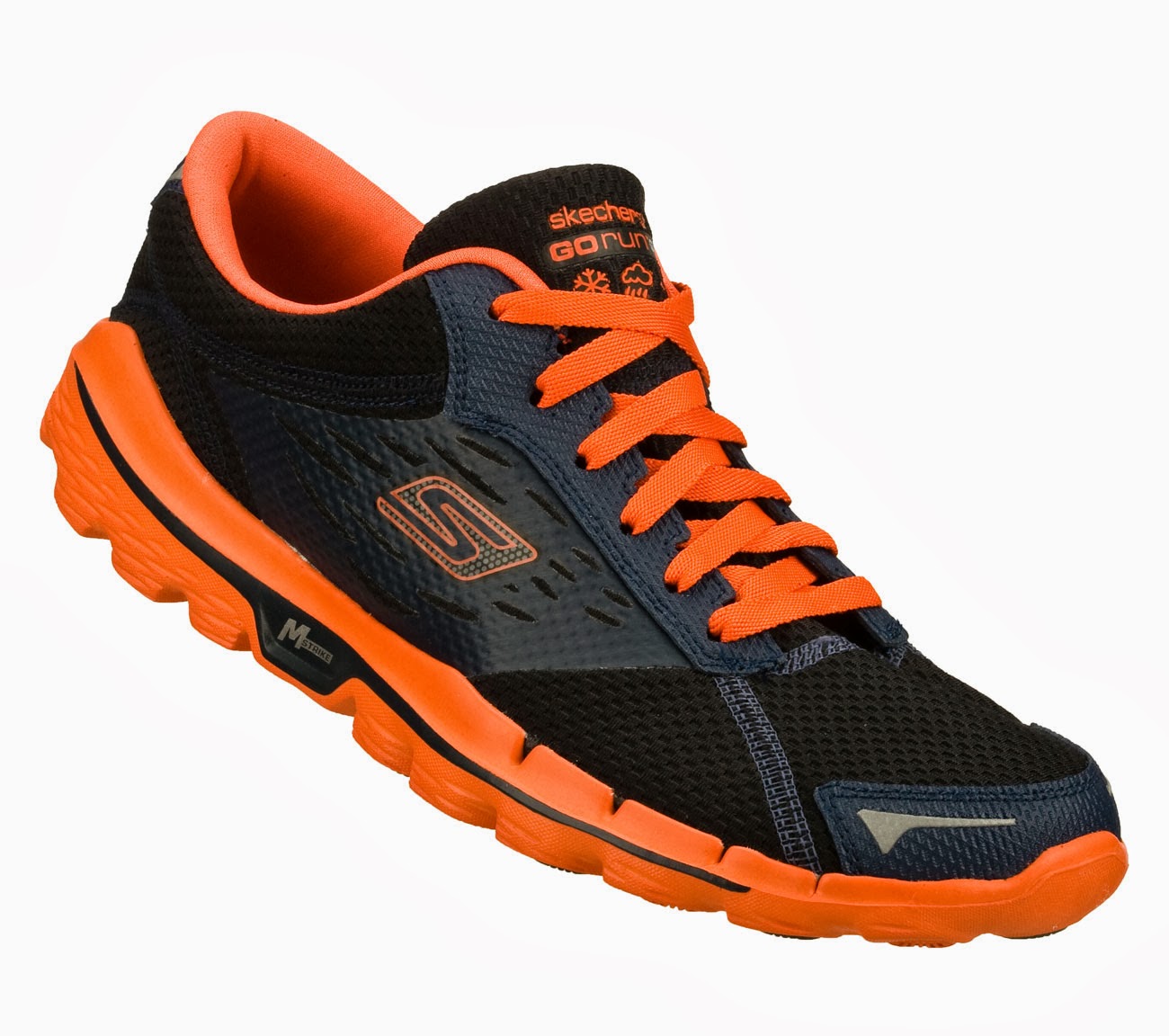 The RunningSwede hope to post review of these Skechers within a couple of weeks, mean while stay warm, dry and safe! #GoLikeNeveBefore
Posted by therunningswede at 7:11 AM No comments:

Less then two weeks until SteamTown Marathon, the Taper has started full force. Like for the most of the runners the taper is a really monster for me. Lot of thoughts are spinning in my head, a specially since I was injured and missed out some important runs close to the race. I got a really good week in with 80 + miles on vacation which was a good motivational and confidence booster. This week I have done some marathon pace and half marathon pace runs and been able to recover well from them. Caleb and #wickedbonkproof has been a great help during injury times and  for the the whole Steamtown training. Caleb has been there to answer all my stupid question which has been a huge help....

As always before my marathons I plan to drink Beet Juice, this year I have found some interesting options, called Beet-It  . A Beet Juice shot, with beet juice concentrate, read about it here and how many athletes used it successfully during the 2012 London Olympics! So if you wanna try something new that might help you on the race day, try Beet Juice!
Some good articles about Beet Juice:


A big part of my running is shoes. The last years I have been running all my runs in Skechers Performance Division GoRun shoes. This includes GoRun2, GoRun Ride 2 and GoRun Speed. For the SteamTown Marathon I'm breaking in a new pair of GoRun Speed. For me Speed is the running race flats that works best. Speed has such a great snug feel with a  responsive out sole  for a fast turn over. I use GoRun Speed for all my faster work outs and Speed was a big part of my personal best run in Boston Marathon this year. So for SteamTown marathon I'm lacing up a brand new pair of yellow GoRun Speeds! #GoLikeNeverBefore 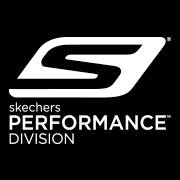 Posted by therunningswede at 7:04 AM 7 comments: