Recently some of the Salming Ambassadors started a Face Book group for all Salming athletes worldwide. Here I have been talking to some of Salming's  amazing talented #nononsense athletes/ambassadors world wide that I would like to present here on my blog.
First out is Salming's smiling Canadian Todd Baranoski. Todd is an amazing ultra runner, who runs crazy long races and always smiles. Todd is also a great guy who always is helpful, always take his time to answer questions regarding Ultra running and trail running. Todd is also one of the few Salming ambassadors who has seen Borje Salming play Ice Hockey live!


How and when did you start running?
I first started running around age 7-8 in Northwestern Ontario where I went for the summers working at my Uncle’s tourist camp.  We would go to his private cabin in the summer when there wasn’t a lot of people in camp for a couple days to relax, or into minnow lakes where we would trap minnows for the guests to use for fishing, or what we call walk in fishing lakes, these were the only accessible by a walking trail a few miles long.  Sometimes I would run the trails that were for the quads to bring in supplies as it was in the middle of nowhere on a remote lakes with the closest civilization a couple hours away.  There was only so much room on the quads and that was taken up by supplies.  So who was ever with my uncle would have to walk.  Or in my case I would run sometimes.  I would race myself each time in and out. 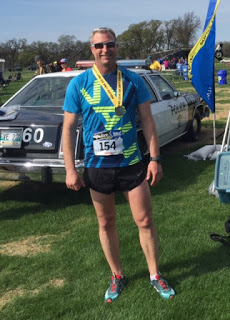 Running the trails in the heart of the Canadian Shield to Randy Lake in the big Jack and Spruce Pines, no underbrush except some blueberry bushes and ferns, the rest a very barren green moss covered landscape under the canopy of trees, going over all the rises and coming out at the peaceful lake, no one around waiting for everyone is still some of my most vivid childhood memories.
I ran through school and the Army the odd time after but really started in July 2013 at 41 years old with my first ½ marathon in the early fall of 2013 and running with my first Ultra(50k) in May 2014.  So I’m relatively still new to running compared to most people.

What's your favorite distance and race and why?

Currently 100k is my favorite distance, type is single track trail, point to point with some good gains.  I think I like it because it seems to be my current level I can comfortably run the entire distance.  I can really push myself at that distance without having to worry about keeping a big reserve of energy. My favorite race so far is Cruel Jewel(did the 56 mile this spring) in Georgia.  I loved the incredible trails, tremendous amount of gain(17,000 ft of gain) without going over 4500ft in elevation, very well organized with incredible people volunteering at the aid stations. 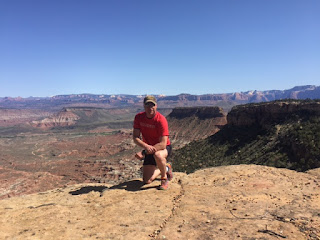 How many miles per week do you usually do?
Typically anywhere from 45-60 on average miles of week with a peak of around 70-80 with different types of runs.  That seems low but because some of my runs I do are not long runs but goal runs.  As an example for hill training my goal for that day will be 1500ft of gain which is about 3 miles where I do my hill training.
My goal is be able to run 100 miles/week consistently I’m hoping I can get there by this time next year.
Where do you typically run, track, roads or trail?
It’s typically around split 70/30 trail to road.
How is Ultra running different from regular running, how does training difference?
That’s hard to explain because everyone is different and have access to different terrain to train.
#1 the distance of the trail races or Ultramarathons is a guideline not an absolute distance.  A 10k trail will be over by a km.  If it’s a 50k it may really be 55k, a 100 mile race may really be a 106 miles.  The RD don’t apologize for it. lol.  It’s a guideline but never shorter. 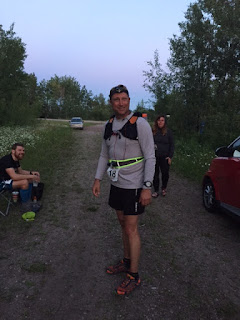 Speed work is just as important as with road racing.  The ability to run fast is directly influences time on feet for both road and trail on what you require of your body.  Fast though is proportional to each type of running.  But why be out there for 30 hours when you can be out there for 24 hrs.
Finally, Fuel and Hydration is big.  On road marathon a person has to worry about 2-5 hours of hydration and fuel.  The needs are required for road, it is different in comparison to someone that is doing 50k-100 miler, depending on the race and where it’s held can be 18-24 hours of on your feet for the first place finisher.  A person needs to learn how to maintain their energy for that many hours.  It’s a lot of trial and error process because everyone is different and how their GI will handle it over a long period of time.
What's your favorite workout?
If you mean gym I don’t work out or strength train except maybe in December when I take a little break from running but that’s mostly to tone up and don’t really take it serious.
If you mean running, my favorite and most dreaded is Tire drag runs.  I think it has a real benefit to hill running and to my overall speed.
How do you plan your running? Coach, book plan or self coached?
Kinda self-coached for now.  Currently I take a lot of information off the internet of what the elites do and try to incorporate into my training schedule.  I’ll make a schedule up in the beginning of each year from what I’ve learned on what I need to work on and then try to put my weaknesses into my schedule.  Even with that it’s always changing and adapting during the year to what I feel what my body can handle.
I know to get to the next level I will need to get a coach that fits into my running attitude and philosophy.
How would you describe yourself as a runner?
Driven-Dedicated

Goal race for the fall? And what's your goal for that race?
If haven’t picked on yet one yet but getting close on deciding, It will be 100 miler.  My goal is to run a sub 24hrs.
When did you first hear about Salming and Salming Running?
Great story.  Early winter of 2015 I was looking for new trail shoes.  They ones I was wearing where to minimum and just didn’t feel right.  I researched for months.  I went to all the running and outdoor stores in Winnipeg trying on shoes that were available to try.  The usual suspects Saucony, Brooks, Altra’s, Hoka, etc etc.  Each one didn’t feel right.  Especially the Altra’s and Hoka’s.  I looked on line and reads hundreds of different reviews on shoes and comparison charts.  I came across Salming in a review for trail shoes.  They were reviewed with a bunch of shoes.  I read the review and thought what the hell.  They are everything I’m looking for.  I called customer service, Laura was awesome as always, and explained that I would love to try their T1’s but wondered if there was a discount available. I explained that with the dollar difference and shipping charges I was worried that they would be another shoe that I wear for 100 miles and put in the closet with others that just doesn’t work for me.  Laura said no problem I can give 20% off to help.

" I read the review
and thought what the hell.
They are everything I’m looking for."

I said that’s awesome thank you.  This was December 22nd 2015, I still have the emails and it’s hilarious how happy I was for the 20% off. January rolled around and a new training schedule started.  I ran every run on the one pair them.  Inside, outside -30C, treadmill, stairs, speed. etc. for the month of January. They were incredible. Been running in Salming Shoes ever since.

How long have you been an ambassador?
February 2016
What's your favourite Salming shoe and equipment?
For road hands down is the Distance 5.  Best shoe all around.  Perfect combination for lightweight for speed but still have enough cushion for long runs.
For Trails has been the Trail series of shoes.  Each model gets better and better and more versatile for different terrain and types of trials.
I wear the most is the Grey Salming running jacket.  Perfect for everything.
I like wearing the short racing shorts but mostly for shock effect. Lol
The Salming Running Long Sleeve tee shirt is awesome.  Makes for a great middle layer in winter and great spring and fall shirt.
I know I would love the Salming running Beanie.  I would cut off the pom pom.


What does #nononsense mean to you?
Don’t train half assed.  Train to improve each time. Leave everything you have on the road or trail.
How does Salming Running fit in, in today's running industry?
I see Salming as a no gimmick running shoe company that make high quality shoe that lasts longer than the competitors. 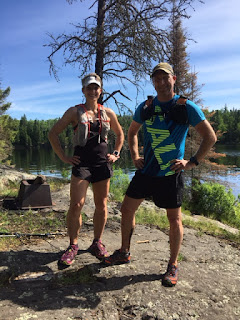 How do you promote Salming as an ambassador?
Interactions on line or in person.  I try to post a lot with races and what I use to race in, that seems to go a long way to promoting.   I try to finish well on all my races to help a lot to promote them.  I will get asked for my opinion about running or if someone is having injury issues I will suggest trying Salming shoes.  I find it key that is if someone is have issues with their shoes to get them to see they have nothing to lose in trying them.
How do you see Salming grow in the future?
I see Salming becoming a mainstream shoe over the next 5 years as it become more widely known.  Especially in Canada.
You have actually seen Borje Salming play hockey in person, what do you remember and what can you tell us about the experience?
When he played for Toronto Maple Leafs in the mid 80’s, not exactly sure what year, they played against Winnipeg Jets(my team) in the old barn. My dad took me for my birthday present and Winnipeg happen to be playing the Leafs.  I was pretty young at the time.  Even though the game was played in Winnipeg there is always a huge Toronto following in the arena when they showed up to play.  I remember him being cheered on a lot during the game from the Toronto fans.  I remember looking up his number up in the program and asking my dad how to pronounce his name. lol he wasn’t sure either.  When I saw him playing in person he certainly stood out on the ice.  You need to have some skill to see it on the ice with a lot of great players out there.
Funny how 20 years after first learning of Borje Salming from hockey and respecting his hockey skills I’m an ambassador wearing his shoes.
Posted by therunningswede at 8:09 PM