Salming Distance 3 was recently released and I have not had a chance to review that edition yet. Rumors started that Salming D4 limited edition was going to be released during the summer. Sure enough pictures started to leak out of an "all black" shoe called D4. D4 was first released in Europe and a couple of weeks later in USA. A little bit of a strange release as D3 was recently released and Im not quite sure why. One thing I know, Im glad they did. Its such an great update.

Salming Speed, Distance and Race have been around for three years now, with only few tweaks as updates for each edition and year. Salming D4 Limited Edt is the biggest update so far on the Salming Running original shoes, not Miles or the trail shoes included.

In this update you will find all the technologies from the earlier editions: Runlite (update, lighter and more responsive)  Exo Skeleton, Torsion Efficiency Unit, TGS 62/75 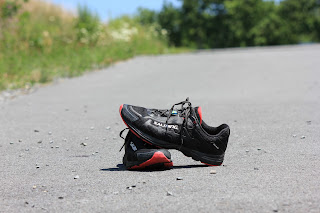 Upper
D4 has a 2 layer construction instead of 3 as the earlier editions of  Distance had and is to the most part seamless. The upper feels a lot lighter and hugs the foot in a less compressed way. As mentioned above the foot is secured by a 2 layer construction and the Exo Skeleton helps to secure the foot from moving to the sides. It has been a very hot and humid summer here in NJ, and the D4 has been handling it very well, the mesh feels light and breathable In some case the overlays on running shoes can interfere with the shoes mesh and the breath-ability. The D4 has minimal and strategical overlays that does not interfere.

Im allergic to brands who does not pay attention to the laces. Salming does a great job with the laces and D4 ones has stayed tied. They are on the  thinner side and can cut in on top of your feet if you laces them to hard.

Color, D4 limited edition comes in an "all black color with some red details, kind of a stealth look. Its either you hate it or love it. I love the black color but Im aware that black might not work for everyone, its personal preference. 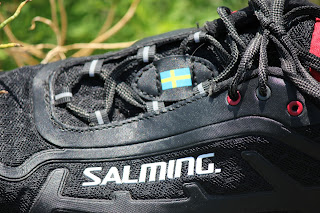 Midsole/Outsole
The biggest change when it comes to the midsole is the new Runlite midsole material and the new outsole material TOC66 (Traction Outsole Control 66). Its now lighter, has a more responsive feel to it and are more flexible. I hate to use the sentence "the shoe feels faster" but that's just the way the new Runlite midsole material and the shoe makes you feel. With the responsiveness and flexibility you get a less restricted toe off and a smoother flow.

The rest of the midsole/outsole stays the same, you find the same Torsion Efficiency Unit as older version of Distance and the same outsole traction pattern. Ive now 90 miles on my D4 and so far no wear and tear on the outsole. 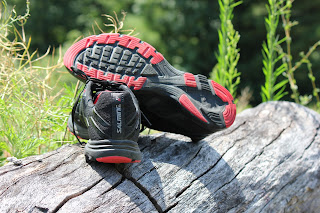 Sum Up
Its a weird release for sure but Im very excited. D4 brings more joy to my run. Its a great update that makes sense. Salming has done small tweaks over the years on the Distance, but D4 is the first one were you can really tell the difference. You will still find the same original idea behind the original Distance, but D4 has now received a well needed face lift,

Distance 4 is now a great contender to other brands marathon racing shoes, like Adidas Adios Boost and New Balance RC 1400. D4 feels lighter, more responsive and it feels like the shoe comes more to life, compare to older versions of Distance. D4 is like a Distance with a Turbo Charger! 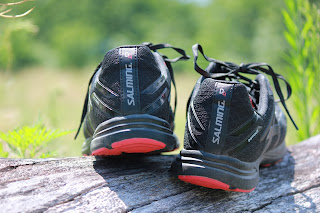 Ive used D4 to all kind of runs and D4 can handle them all. I wouldn't hesitate at all to take D4 the full 26.2, or just use it as my daily trainer. You can throw anything on D4 and it can handle it all.

Now since  D4 is closer to a marathon racer, I'm curious what will happen to my old Salming marathon/tempo shoe, Salming Speed! 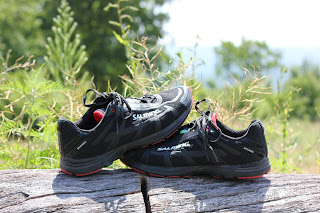 Posted by therunningswede at 6:45 PM