This was the first Boston Marathon that I did not really know where I was standing, when it comes to training. Usually I have about +1000 miles, all outdoors. This year, Jan-Feb were all on treadmill, after midnight, after work. Usually in bed at 2am. Running with a newborn is a real challenge and I had to get my miles in whenever I could. March and April I did most of my runs with Ella in the stroller, most of my miles I could keep my target pace but it was tiring. So with that in my mind, I was not really sure. All I knew was that I had done my very best and in the end that is all you can do. I couldn't have done this training without all the support from my wife Erin! Taking care of Ella when I have been on the treadmill in the middle of the night! 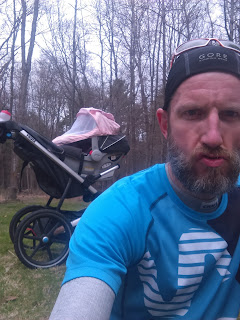 Weather forecasts called for warmer weather but the forecast were mixed. I was not sure how warm or cold it was going to be. I was prepared for hotter conditions, salt tab and I also brought two gel flasks with SOS rehydration, plus I would get two new bottles at mile 14. As fuel this year I had been training with UCAN generation, I would also get two Untapped Maple gels at mile 14 as back up.
Again I was picking Salming Running Speed 3 as my shoes. I used Salming Speed last year as well and I know they will give the best protection and feel for the 26.2.

This year we also decided to go up Sunday, which meant early morning, 4am and of course Ella did not let us sleep at all. So I think that the lack of sleep had a big impact on my Monday performance.

This was also the first year I had to take the bus out to Hopkinton. I meet up with two team mates from Team Wicked BonkProof  , Carsten and Zach. Before the race we sat by the start, close to Porta Johns with no lines #protip. 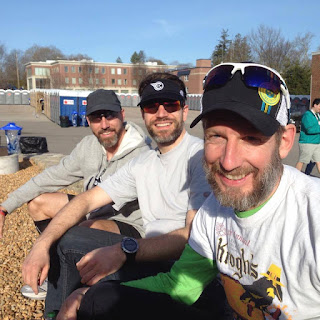 The heat had already started to hit us, around 60-65f, not perfect as you have to sit and wait for 3 hours. But I enjoyed really great company. Still the plan was to run a sub3.

As the race started the temp had reached 70f, everything felt good and I tried to control my pace, not to bank time on the downhills. Even if the split did not hit the 6:45 I had planned for I was not worried, first couple of miles were all under 7. I made sure to hydrate well, first a sip of SOS and then a cup from water station. Im not a strong runner in the heat (must be my Viking blood) and at mile 7-8 I started to feel that I wouldn't be able to keep a sub3 pace the whole way to Boylston Street. Time to go for plan B, run steady an safe to secure a BQ for 2017. I always make sure I have a back up plan. My last couple of marathons I have been forced to make pit stops to empty my blatter. At mile 10 the first stop came. It probably only took me 30 sec but still annoying. This was not my only stop, about 5 miles later it was time for #2. It was not an emergency stop but I played it safe. I'm not sure why I had to go #2 but I would think the heat had a big part of it, maybe the UCAN but I have been fine during training. I think I lost about 3 minutes at this stop.

I was carrying my second load of UCAN in a AmphiPod belt and two small 4oz bottles, as soon as I had finished those at mile 13, I ditched the belt as it started to chafe when the bottles were empty. As mentioned above I was going to receive two more bottles of SOS and two gels at mile 14.
13.1 I passed around 1:31:45, for a second I was thinking of picking up the pace again as I was thinking this is not to much behind, but again I stayed with plan B to run steady and BQ.

When you hit the Newton Hills (mile 16-21), your really get a proof if you have been running smart. I look around and I see runners who start to walk. Still keeping a steady pace and counting down the Hills. Finally Im at the HeartBreak Hill and I see another Swedish runner, I cheer on him and he respond "I'm smoked". At the top of the hill you know its mostly downhill to the finish. Here I take the first of my two gels, UCAN was not enough for me and the full 26.2. Second gel I took 3 miles later. These two gels helped me to keep up the pace for sure. I did try to pick up pace where I could but mostly I played it safe. Its always great to get closer to the finish line and the last miles closer to Boston. I think this is the first year I have been focusing more on the crowd, trying to suck in the atmosphere. At mile 25 my left hamstring started to cramp up, I stopped for a few to massage it and then pick up my pace again, this happened again on the final stretch, not a big deal. I played it safe again and stopped.

My time ended up being 3:12:35, not my best time but Im very proud of myself for how I ran it and with all preparation and sleepless nights I been thru. The best reward was to see Ella and Erin. She such a happy girl and when she grabbed my medal I knew she one day will be a Unicorn Hunter!

Also a big shout out to Salming Running USA for all help and support, Im so proud and honored to be able to wear Salming and Swedish gear!

Caleb Masland for great coaching and training plan. Adjusting my runs to fit my schedule, treadmill and stroller running! Best coach out there! www.coachcaleb.com


Pros 2016:
-Meet Ella and Erin after, best reward ever!
-Great hydration plan (not UCAN included)
-Prepared race plans, turned to Plan B when A did not work and did not stress out about it.
-New BQ
-Meet TWB lads
-Salming Gear! (Split shorts, Race singlet, hat, Speed3)

Cons 2016:
-Energy source, UCAN did not last the whole 26.2 for me. Used back up gels (pros to be prepared)
-Pit stops, could have been the heat. Did not eat anything that im not familiar with.


Posted by therunningswede at 8:04 AM