Salming Distance has been with Salming since the very first start and was awarded best debut by Runners World when it first was released. So what has happened over the years with Distance? Distance became immediately my favorite Salming shoe. The fact that Distance worked really for my faster day, longer days and for race day, got me hooked. Salming original was streamlined had a three layer upper that wrapped you foot perfect. Over the two next editions, Salming tweaked a bit with the uppers and lost some of streamlined feel. Version 2 felt a bit too wide and 3 a bit too long for me. Then out of the blue, a few months after D3 was released, Salming released the all black D4! The original feel was back, this time with a two layer upper and with a more responsive Runlite midsole. Now D5 has been out for a while and the original feel is still very much there. Introducing  Todd Baranoski (instagram Todd_ultrarunner) who will also give his opnion on D5! 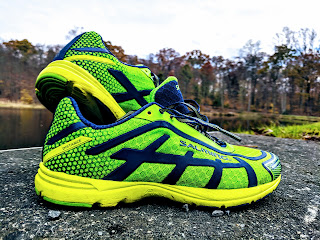 Salming Facts:
Allow yourself the pleasure of covering long distances with Salming´s best selling natural running shoe. With great durability and a 5 mm heel to toe drop, this shoe is designed to help you overcome both long distances and hard surfaces. 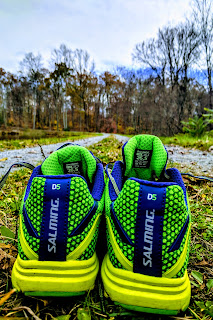 RunningSwede says:
As mentioned above, D5 has the same feel as D4 and the original feel of the original Distance. Upper is streamlined with a simple structured mesh and the Exo Skeleton to keep foot in place. What I like is the simplicity of this upper. Its just enough and at the same time very functional. I always get the feeling that this is a racing flat, which is true, but it can be used for so much more. If you could only
have one shoe, this would be it. Its enough for long days, tempo/work out days and race day. The new lighter and more responsive Runlite works really well for all this categories of running and it is very responsive. A torsion unit in the mid foot helps you with some stability and heel/toe transition. I have used Distance for marathons and recently I used D5 for the last 10 miles of a trail 50K race. D5 would be light enough for a fast 5K but also give you enough protection for a marathon without slow you down. I often get the question what shoe can you compare Salming to. D5 would be comparable with Adidas Adios/Boston, Nike Elite and New Balance 1400.

Todd's opinion:
Being primarily a trail runner my first shoes with Salming were their Trail shoes which I love and carried me across thousands of training and race miles. Since I kinda came into their shoes from different direction than most people I wanted the same awesome fit and feel to match for a daily road trainer. That being said I’m a huge believer in matching trail shoes to the road shoes. You don’t want to have to change your cadence or style to get the same speed out of your shoes. That is also how I recommend shoes to people that ask me, as a set to use together. The D series especially the D5’s are that shoe to me. With the D5’s I get a seamless transition from D5’s for fast road  training and the T3’s for fast trail running. Yet the I still use them for the odd road race I do. I can’t wait to see what upgrades Salming come up with the D series to help get even faster. 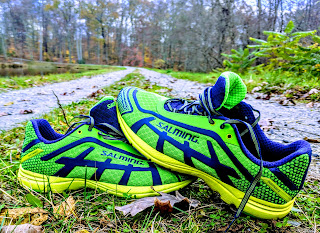 Where do Salming go from here?
Salming Distance is the back bone, the soul of Salming Running line up. The shoe has been with Salming since the beginning, without any major changes and it breathes the feeling Salming slogans are saying, #nononsense and #naturalrunning. Maybe Salming should give the Distance a major facelift like they did with Speed5/6? I could actually see Race and Distance as one shoe, to get a more of a marathon racer. Salming can do this without loosing the feeling of Distance and Race, and at the same time cover the gap in the line up for a true marathon racer........

Disclosure of Material Connection: I receive Running shoes from Salming Running USA as part of their brand ambassador program. I was not required to write a positive review. The opinions I have expressed are my own. I am disclosing this in accordance with the Federal Trade Commission’s 16 CFR, Part 255: “Guides Concerning the Use of Endorsements and Testimonials in Advertising.”

Posted by therunningswede at 8:13 AM