Watergap 50
Training heading into my first Ultra marathon, Watergap 50K has been extremely tough. Usually I have a rough time coping with my seasonal allergy and the extreme summer humidity in New Jersey. This year I have been feeling more sluggish and not been able to recover and keep paces that I was looking for. I also doing all my training with Ella in the stroller, which add some extra effort. Two weeks before the race we went on vacation to Cape Cod, I was hoping to recover and to come back to New Jersey well rested but it went the other way around. I felt very tired and I was almost ready give up on the race. Plan for the race was to keep a 7:30 pace but that pace felt almost impossible to keep for me at this time. My long runs has been decent although I did not push any paces during these runs. Team Wicked Bonkproof coach Caleb Masland has been very helpful as usual getting me ready for the task. As the race elevation profile has 2500 ft gain and one big hill at mile 5, we have been training more hills then usual. Hills comes easy to me and I live in a hilly area, so I was as not worried really about the 2500ft of gain, but with that said Boston marathon has about 800 ft gain, I knew I needed to some more inclines under my feet before the race. 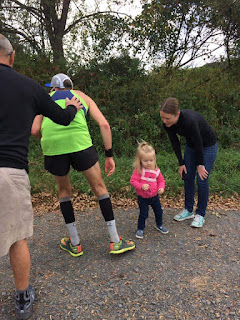 The last week I did not do much running, trying to just rest and relax and hopefully get some energy back. Of course keeping an extra eye on the weather. For the most part this week the weather was cooler in the morning, with less humidity but for race day it showed warmer and more humidity again. Not a good situation for me, as I do not preform very well in humid conditions. At the end of the week before the race, I felt OK, but not 100%, maybe it was just the taper nerves.

The course is mostly on crushed limestone, old rail beds along Delaware River. Before the race I've been talking a lot, to my friend Todd in Team Salming world ambassadors about shoes. Salmings shoe trail5 was recently released but it felt to soft and way to much shoe for me, so I narrowed it down to Salming Speed6 and Salming D5. Last day I decided to go with the brand new Salming Speed 6 as I had done all my long runs in that shoe. It has also a wider toe box and a wider last, that I thought I could benefit from.
The race offers Tailwind energy drink at the five aids station. Tailwind works great with my stomach and since I've to carry a bottle anyway I decided to train with it and use it for the race.

Race and race morning:
Race is Saturday morning, alarm was set to 5:00. We live 10minutes away from the finish line and where the bus takes you to the start goes from, Milford beach PA at 7:00 am. Its always nice to be able to sleep in your own bed before longer races. Around 6:00 I left the house and got to Milford in good time to use rest room and relax. In the bus to start I had my beet juice and a bottle of waxy maze. While at start you have about ten minutes to shake out the stiff legs from sitting cramped in, in a school bus for about 45 minutes. The temperature was about 50 degrees and sunny, you could feel the humidity. 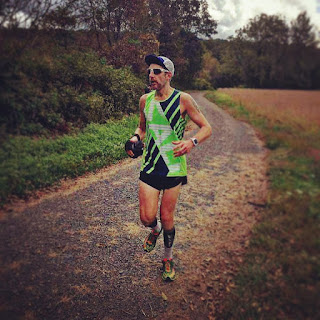 At start 3 runners took off quickly with 3 others in a group to follow in a slower pace. I decided to go out slow in my own pace, first mile was about 8 min pace. After about 4 miles I had caught up with the group ahead of me as they had slowed down, but we had 3 runners ahead of us. At this point I was doing about 7:30 pace and felt comfortable. I had no attention to try to drop the other runners in the group and I was also nervous about the long hill between mile 5-6. The hill showed up fast, this part is single trail. I noticed that the other two runners I ran with was breathing very heavy during the hill and that gave me some confidence for the rest of the race. At this point we had 3 runners ahead of us, out of sight. The long hill was easier then I had expected and I was glad to see the first aid station on top of the hill. I had decided to break the race in to small goals, the aid stations, and refill bottle every aid station with tail wind. Plan was to take fluids every mile and have an empty bottle at each aid station. At first aid station the bottle was not empty and I started to worry that I'm not drinking enough. After the first aid station I had to stop quick for a pit stop but caught up quick with the only female in the group. We were only 2 after the long hill. Miles went fast and this part of the race was pretty flat, some long down hills right after first aid station. The same story  at the second aid station, my bottle was not empty, although I tried to remind myself to take big sips when it was time. After the second aid station I was by myself, at this point of the course you run mostly by  long corn fields, between the fields there are small creeks, with small steep hills. All those many small inclines started to get to me at this point. After the third aid station, my ITB started to be tight and I had to pay attention to the trail and what direction it was tilting, trying to keep it as flat as possible for my ITB. My feet also started to hurt in the mid foot area, as the Speed6 is a racing flat and does not have as much support and structure in the mid foot. It would have been fine if the race had been on pavement, but the crushed lime stone broke down the shoe. The third aid station came quick, here I started to feel that I definitely needed more energy. I had three "emergency rockets" gels in my bottle pocket, but I grabbed a Clif Blok with caffeine at the aid station. My other gels I used later in the race and I think this helped from a total crash. 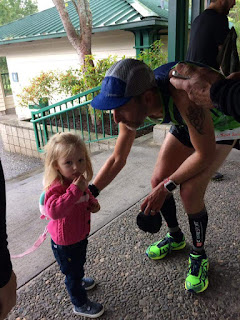 Before aidstation 4 at mile 21, I had decided to switch shoe as I would have support from family there, but they had left the shoes in the car, thinking I would use them after the race. It was great to see family with Erin and my daughter Ella, a huge booster to keep going even if things started feel rough. After aid station 4 I knew that the single trail was going to start, after a few miles there was a short section, not to bad. I was also crossing the intersection by Dingmans Bridge witch means Im close to home and Milford. Around this time I first saw the runner in third place, he was about a minute ahead of me, right after this the last aidstation showed up at mile 26, this is also the last aidstation. As I ran up to the station I also saw my family again who had decided to see me another time and they had my Salming D5 shoes. I made a quick decision to change shoes as more single trail was coming with inclines and I could use some extra support and grip under my feet. I also took a bottle of Waxy maze. This gave me some extra energy. Again awesome to see my love ones.

I was hoping that the runner ahead of me would be tired, but I never saw him again. The single trail was very technical and a lot of steps/stairs to climb. I could not get into any kind of rhythm as I was very tired at this point, the stairs/steps I just power walked as I wanted to save my last energy for the flat last couple of miles. I was very happy when I saw the end of the single trail but could not pick up any kind of pace and just "jogged" the last 3 miles. The last three miles the sky also opened up and I got soak wet. I finished 4 in the rain and my family was waiting for me right by the finish line. I was tired but very happy. I little bummer I couldn't catch the third guy, no matter if I had just saved a few minute not changing shoes, I don't think I would have caught  him. He third guys also told me that he caught a second wind after he saw me and finished strong. 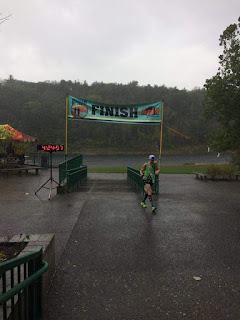 As this was my Ultra debut, Im happy with my performance but I could have done things a bit differently. 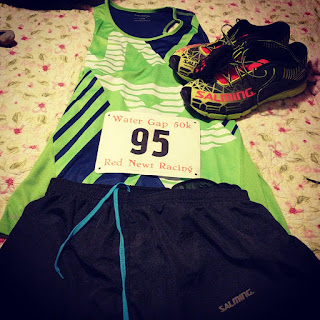 This race definitely gave me more taste more Ultras and I will sign up next year again, for a little rematch. I have also lookoed into Red Newt  Racing who organized this race and their series for more races. Red Newt racing was great and had great people by the aid stations.
Posted by therunningswede at 7:11 AM